We made Tilt Avatars so you can try Tilt without first setting it up for your own project.

Tilt Avatars consists of a Python web API backend to generate avatars, and a JavaScript SPA (single page app) frontend. It doesn’t matter if you’re not a Python or JavaScript guru — you won’t need to deeply understand the project code to learn about the Tiltfile and other Tilt concepts.

We know that no two projects are alike!

This project uses Dockerfiles with Docker as the build engine and kubectl-friendly YAML files. But that’s only a small subset of Tilt functionality.

Even if you’re using other technologies (e.g. Helm, CRDs, podman), we recommend starting here to learn the Tilt fundamentals.

Once you’re comfortable with how Tilt works, we’ve got comprehensive guides on Tiltfile authoring that cover these topics and much more!

Run tilt up for the First Time

Tilt brings consistency to your development not only due to ensuring a reproducible dev-environment-as-code, but launching any Tilt project is the same with the tilt up command, so you always have a familiar starting point. tilt up starts the Tilt control loop, which we’ll explore in more detail in a moment.

For this tutorial, however, we’re going to use a special tilt demo command, which will perform a few steps:

Run the following command in your terminal to get started:

You should see output similar to the following in your terminal:

First, open the sample project directory in your preferred editor so that you can make changes in the following steps.

Once you’ve got the sample project open, return focus to the terminal window and press (Spacebar), and the Tilt UI will be opened in your default browser.

In the next section, we’ll explain the Tilt UI. But first, let’s dissect what’s happening in the background.

You can clone the sample project and run tilt up directly:

Once finished, run tilt down from the tilt-avatars directory to clean up.

When you run tilt up, Tilt looks for a special file named Tiltfile in the current directory, which defines your dev-environment-as-code.

A Tiltfile is written in Starlark, a simplified dialect of Python.

🐍 Not a Python expert? No worries. Our guides have lots of examples, so you can copy & paste your way to success!

Because your Tiltfile is a program, you can configure it with familiar constructs like loops, functions, and arrays. This makes the Tiltfile more extensible than a configuration file format like JSON or YAML, which requires hard-coding all possible options upfront.

When Tilt executes the Tiltfile:

Within Tilt, the Tiltfile is itself a resource, so you can even modify your Tiltfile and see the changes without restarting Tilt! 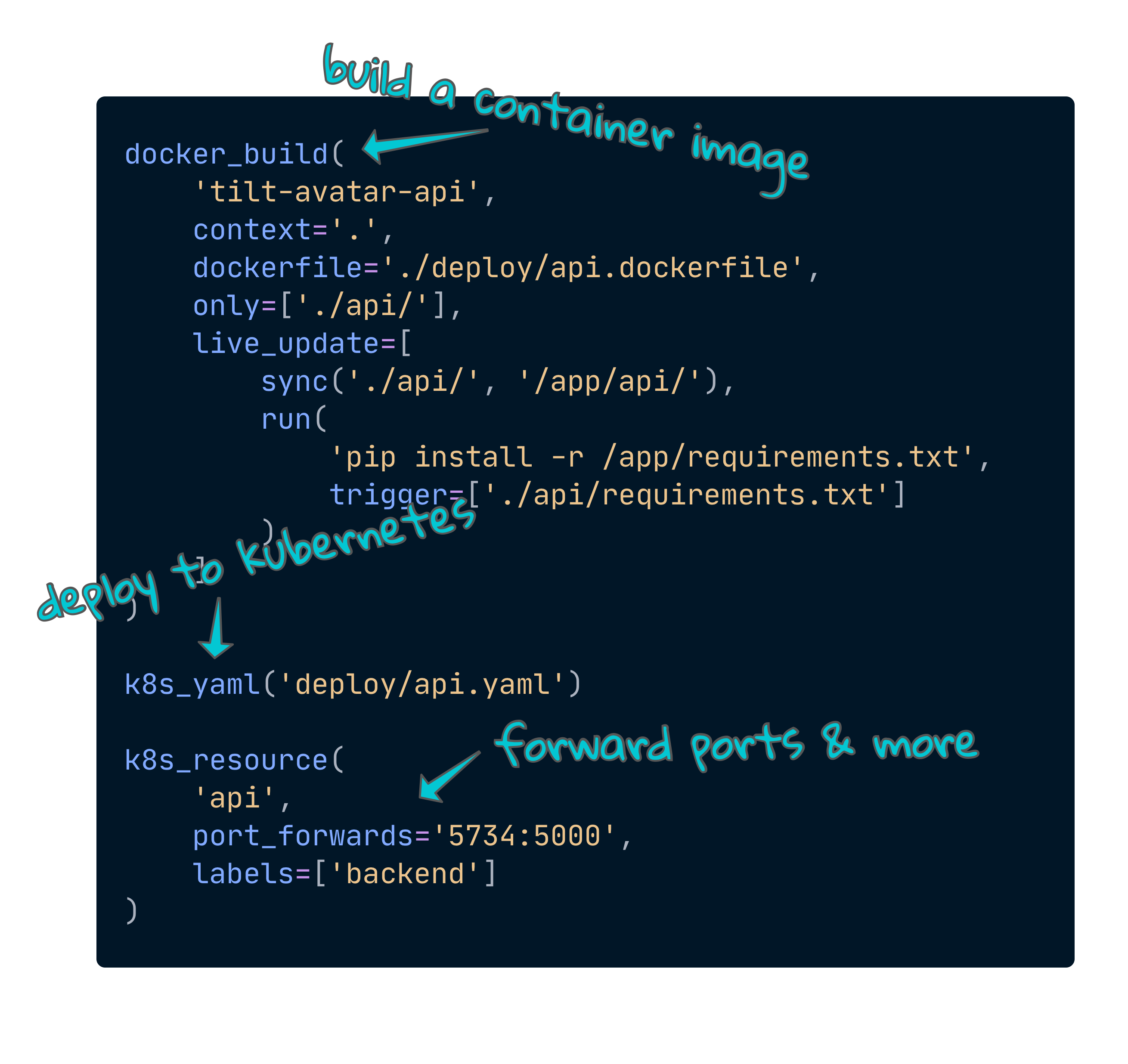 Later on, we’ll explore how Tilt makes it possible to optimize this process even more. You can skip container re-builds and Pod re-deployments entirely via Smart Rebuilds with Live Update.

(If you’re curious, go ahead and open the tilt-avatars Tiltfile and read through it. We won’t tell anyone you peeked.)

For now, that’s all you need to know!

A “resource” is a bundle of work managed by Tilt. For example: a Docker image to build + a Kubernetes YAML to apply.

😶‍🌫️ Resources don’t have to be containers!

Tilt can also manage locally-executed commands to provide a unified experience no matter how your code runs.

Resource bundling is automatic in most cases: Tilt finds the relationship between bits of work (e.g. docker build + kubectl apply). When that’s not sufficient, Tiltfile functions like k8s_resource let you configure resources on top of what Tilt does automatically.

Because Tilt assembles multiple bits of work into a single resource, it’s much easier to determine status and find errors across update (build/deploy) and runtime.

Whenever you run tilt up or change a source file, Tilt determines which resources need to be changed to bring them up-to-date.

Tilt knows which files correspond to a given resource and update action. It won’t re-build a container just because you changed a Pod label, or re-compile your backend when you’ve only edited some JSX.

🔥️ When you tilt up, if your services are already running and haven’t changed, Tilt won’t unnecessarily re-deploy them!

Unfortunately, just because it builds does not mean it works.

In Tilt, the runtime status lets you know what’s happening with your code after it’s been deployed.

More importantly, Tilt lets you know why. There’s a lot of ways things can go wrong, and Tilt will save you from playing “20 Questions with kubectl.”

Tilt is based around the idea of a control loop. This gives you real-time, circular feedback: something watches, something reacts, and equilibrium is maintained.

This is intentionally more “hands-free” than other dev tools. Traditional build systems like make are oriented around tasks that are invoked on-demand by the user. Even many service-oriented development tools like docker-compose up don’t react to changes once started. Newer tools, such as Webpack, often include hot module reload, but have limitations. (For example, changes to webpack.config.js require a manual restart.)

Some examples of what Tilt handles for you:

So, once you’ve run tilt up, you can focus on your code and let Tilt continuously react to your changes without worrying if they’re the “right” type of changes.

This has other benefits: for example, when you run tilt up, Tilt won’t re-deploy any services that are already running and up-to-date!

Was this doc helpful?